In addition to our annual Rising Scholar Award, we look for ways to support our new generations of researchers, whether they are just starting school or are moving on to higher education. It is our hope that early exposure to the sciences will spark lifelong interests and enduring passions for conservation.

MTI’s PTTs for Schools Program is part of our ongoing efforts to nourish a love for biology and ecological awareness in school-aged children by making our state-of-the-art transmitters freely available to them. We find that educating school children about conservation has a positive "ripple" effect in their communities as it promotes and propagates ecological awareness and removes misconceptions from the local populations about the species being studied when the students share their experiences with family and friends.

To celebrate our 20th anniversary, we donated 15 transmitters to the following four schools:

Read about these projects in our Winter 2007 and Spring 2008 Newsletters.

In celebration of our 10th anniversary, MTI awarded eight free transmitters to school students across the world. The following groups constituted the winning entries:

Learn more about the results of these exciting projects in our Spring 2002, Winter 2002, and Spring 2003 Newsletters.

Rob Paswaters, a Science Resource Specialist at Osceola County Florida, and his middle school students set out to track Great Blue Herons in Central Florida. Our company donated 3 satellite transmitters to their projects and were so impressed by the students' enthusiasm for the project that we began seeking more ways to allow young researchers worldwide to share in field research opportunities.

In 2001, we also awarded scholarships to two graduating seniors from local high schools who were planning to study biology in their higher education. Joseph Nuffer (Hammond High School, Columbia MD) and Lauren Wilde (Long Reach High School, Columbia, MD) were selected for their excellent academic achievements and involvement in the community. Joseph was headed for the University of Virginia with plans to study molecular biology, and Lauren was going to Wake Forest University to major in biology with a special interest in genetics.

In celebration of our 25th anniversary, we sponsored promising students to attend several conferences around the world throughout 2017. 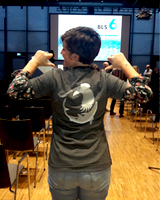 Students attended the ARRCN with Dr. Jayson Ibanez (Director for Research and Conservation of the Philippine Eagle Foundation)