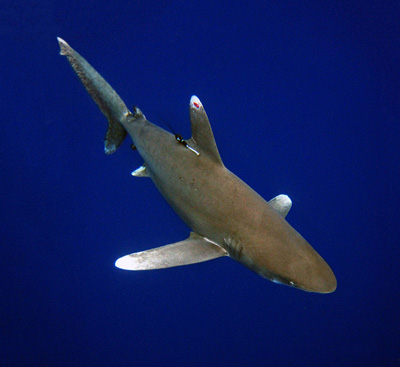 The purpose of the release ("pop-off") mechanism is to free the tag from the animal, enabling the tag to float to the surface where the transmitted data can reach the Argos satellite constellation. Successful projects require tags to remain attached to individuals for a predetermined amount of time to collect the data necessary to address study objectives. Additionally, a tag should initiate its release mechanism (and begin transmitting) when a tagged individual dies or if the tag is prematurely shed. Our release mechanism is strong and proven to remain intact on highly mobile species.

The release mechanism is initiated by one of four possible triggers:

When a fish tag is ordered through our online Production Portal, the pop-off date (mm/dd/yyyy) or deployment duration (represented as a number integer of months) must be specified. For example, a tag with a 9-month deployment duration deployed on March 2, 2018 would pop off on December 2, 2018, provided the tag did not release prematurely due to one of the other possible triggers.

Our tags include an automatic release feature, whereby a tag initiates the release procedure when a “constant depth” has been detected. If a tagged individual should die, sink to the seafloor, and stay within a predefined depth band longer than the programmed “constant depth” duration, the tag will initiate the release procedure, which begins with the corrosion of the link holding the tag to its tether, and culminates in transmission of recorded data.

The constant depth programming is meant to increase reporting rates on occasions when a tagged animal dies, or when a tag is shed before its schedule pop-off date. Enabling a tag’s prompt release and data transmission reduces the chances that it could be fouled in a topographical structure (such as a reef) or ingested/damaged before it is able to transmit data. Also, in the case of a free-floating tag, the longer it is floating at the surface prior to transmission, the greater the danger it could wash ashore and be buried, perhaps never to be heard from again.

The magnitude (depth band in meters) and duration (in days) of the constant depth settings should be considered with regard to the study species’ known/presumed vertical behavior.

For X-Tags deployed on strongly benthic-associated species which may not ascend from the seafloor for extended time periods, the default constant depth programming (3 m, 2 days) may cause the tag to initiate the release procedure even though the animal is behaving normally. Ideally, for species that exhibit this type of behavior, a longer-duration constant depth programming would be most suitable. At the same time, this longer-duration constant depth programming would be counterproductive for a free-floating tag that was shed prematurely. Thus, dual-band programming allows users to define two distinct constant depth magnitudes and durations, above and below a specified threshold depth. For example, for a species known to associate with the seafloor at depths >50 m, a threshold of 15 m may be chosen. Below this threshold depth, the Constant Pressure setting could be programmed to appropriately reflect the vertical habitat use of the benthic species (3 m, 10 days). Above the 15-m threshold, the Constant Pressure setting could be programmed to detect a free-floating, prematurely shed tag (3 m, 2 days).

A tag must register depths below the emergency depth threshold (~1250 m) for approximately 15 minutes before the release is initiated. The tag will not detach instantaneously with the initiation of the release mechanism. Based on our tests, it can take approximately 15–30 minutes (given average ocean salinity) to detach. Thus, the Emergency Depth Release is meant to err on the side of caution to avoid reaching the maximum depth rating for the device.

Tags use the 2-minute depth readings to determine if the Emergency Depth Release should be initiated. Therefore, the time when a tag crosses the Emergency Depth threshold may not be represented in the transmitted dataset (i.e. 15-, 30-, or 60-minute records).

Default programming allows for depth records ranging from the surface to approximately 1250 m. The crush depth of PSAT PTT-100s and X-Tags exceeds 2100 m and 2400 m, respectively. However, please alert us prior to ordering if your study animal uses depths >1200 m.