What is a Pop-up Satellite Archival Tag? 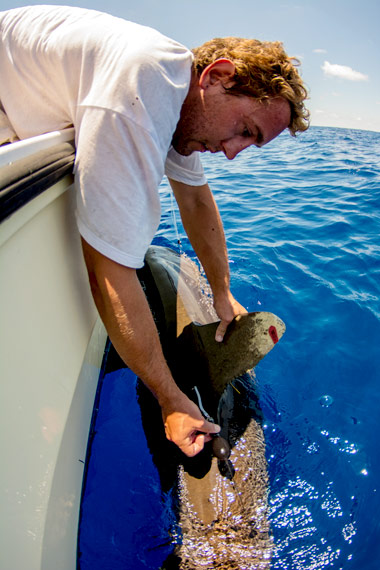 A pop-up satellite archival tag (or PSAT) is a satellite transmitter designed to record the behavior and habitat use of marine species. Once properly deployed, the tag operates autonomously, collecting and archiving pressure (depth), temperature, and light-level data in a valuable time-stamped (time-series) format. Using a low-drag design, MTI tags are composed of pressure-resistant materials with just enough buoyancy to allow the tag to float to the surface once detached from the organism. MTI tags must be in salt water in order to detach properly, so please contact us if you are tracking an anadromous or catadromous species.

The release mechanism enables the tag to detach from the tether (and animal), allowing the tag to ascend to the surface where the archived data can be transmitted to the Argos constellation. The release mechanism initiates automatically when the tag reaches its programmed pop-up date or the end of its user-specified deployment duration. However, the tag will also release and begin transmitting if it registers a constant depth for a predetermined length of time or reaches memory capacity, minimizing the time the tag is attached to a deceased animal or adrift and susceptible to damage (the Memory Full release applies to tags with High Rate programming only). Additionally, tags are equipped with an Emergency Depth ("Too-Deep") Release to ensure the crush depth is not reached, thereby protecting the valuable archived dataset.

Upon surfacing, the tag transmits on a Satellite-in-View (SiV™) schedule. This means that the tag aligns the timing of transmissions with times when a satellite is most likely passing overhead, thus saving valuable battery life and maximizing data retrieval. The dataset then passes through the Argos system where it is available to be downloaded by the user. Once provided to us, MTI processes these individual datasets into a more comprehensive, usable format that we refer to as Data Reports.